Bryan attended a Youth Challenge program that lasted for 22 weeks. This program was designed for at risk teens, who might need a little help getting their GED. Some kids are court ordered, others go voluntarily. Bryan was in the middle of his Senior year when he realized he was not going to be able to graduate in May. He thought this program would help him in reaching his goal of getting his GED. It was similar to a boot camp program, pretty rough, but he excelled at the program! We attended his graduation and we were so proud of his accomplishments! 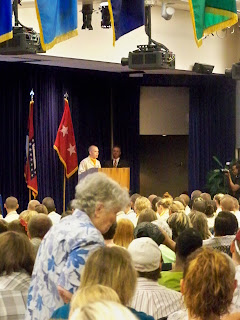 Out of 200 kids, Bryan received the Outstanding Cadet Award, or Best Overall, not sure of the exact title, but he was the BEST! He didn't know and we were surprised too! 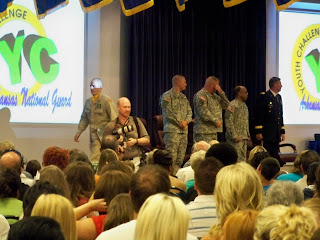 He gave an awesome speech, I am pretty sure that guy is wiping tears, I know I was! (A little background info, six weeks into the program, right before Addy was born, Bryan's mom passed away. He could have quit, no one would have been mad, but he was home for three days and went back. He could only write to us and he could make 2 minute phone calls once a week. We grieved with him and for him. We know his Momma would be so proud.) Of course he discussed all of this in his speech, (hints all of the crying!) 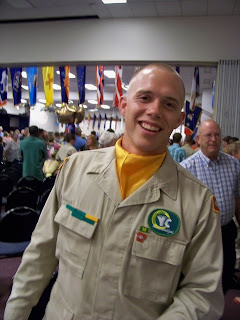 The Most Outstanding Cadet
(at least in my book)
Bryan did so well, they talked him into joining the Guard. I'm not so thrilled about that, only because we will miss him a lot, but I know he will do well. WE ARE SO PROUD OF YOU!
Posted by Jess at 8:00 AM