We are 39 weeks now! Not too much longer and we will be holding our new baby. Our original due date was February 19th, but we were not real sure of our dates. Mid-pregnancy, our ultrasound was more consistent with a due date of February 13th. At 20 weeks, the doctor said we would stick with the 19th on paper, but if it looked like I was going to go over, or the baby was going to be big, he wouldn't let me go too far past the 13th. Well... 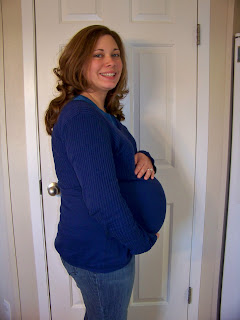 ...looks BIG enough to me!
This is by far the biggest my belly has ever been! I have resorted to wearing my Dad's t-shirts around the house because nothing else is long enough. We are "measuring over again," (whatever that means, I'm pretty sure it is not an exact science) but I really do NOT want to be induced.  In fact, the doctor asked me, "how big was your biggest baby?" my response, "8 pounds and 3 ounces" (Aiden- who was plenty big enough for me). Then he asked if I was trying to set some kind of record with this one.  No, thanks!
We would really like to go into labor on our own this time. We have been induced with the other three, which was nice to have scheduled, but not necessary. Although I did begin to question our decision this past week with a blizzard in the forecast. I knew Jake would probably stay over at work and I was a little panicky thinking about the possibility of not being able to get to the hospital! At our visit on Tuesday, Dr. S said we were not going to have a snow baby. What a relief! The baby's head is still really high and my cervix has not changed a bit.
So, our blood pressure is great, baby sounds good, and we go back next week. When I asked how long he would let me go, Dr. S said it all depended on me and the baby. Based on how my visit was this week, he said he would not start to get nervous until March 5th. I honestly feel much better with this pregnancy than ever and I can't complain at all. My theory is that we will have a March toddler instead of a February baby!
Posted by Jess at 8:00 AM