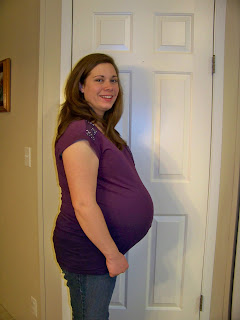 So d-day's here, but no baby! We found out with this pregnancy (still learning) that average gestation is 41 weeks and 1 day. That means February 27th for us; if we are average, we could be more or less. At my appointment this week, we were dilated to 3 cm and 60% effaced, a big change from last week. We also learned this pregnancy that all these numbers don't have as much meaning as we previously thought, :( and every pregnancy is different. I tend to be very pessimistic so I still believe we will have a baby around the beginning of March. Dr. S on the other hand is apparently very optimistic. He told me to make my appointment for next week, but he felt I would have the baby before. This almost sent me into panic mode, but then I remembered, only God knows, and he is in complete control. This is a very hard concept for me, I tend to like to be in control, but this pregnancy I have let go. Yes, I HAVE LET GO. Hopefully, there will be no scheduled induction, no shaving my legs the moment before we go, no make-up and hair perfectly done, no picture at the back door, then mopping myself out of the house as we head to the hospital (yes, this has happened the last two times). It is a little scary and overwhelming, yet so freeing in the same sense. I am not in control, my Heavenly Father is and he will take care of me and this baby. He already has everything planned and I don't have to worry about a thing! However, this information has sent everyone else into a frenzy! Hasn't anyone heard the saying "a watched pot never boils?" Well, I feel watched and I am definitely not boiling, so I might have to turn off my phones and become a recluse after today. Just kidding, but if I am not as tactful when I am asked, "How are you feeling?" for the 1000th time in one day, don't take it personal. I'm blaming it on the hormones. ;)
Posted by Jess at 8:00 AM