We rarely see snow at our house. Once a year is typical, and enough snow to play in is pretty rare. We were lucky enough to get a little over 7 inches about a month ago, and the kids had a blast! It started snowing on a Sunday afternoon and snowed until early Monday morning. Church was canceled that night so the kids got to go out with Daddy and play. 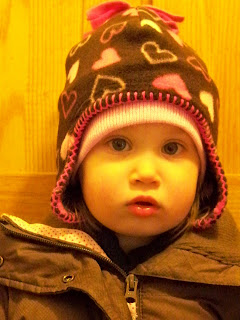 Ava all bundled up and ready to play! 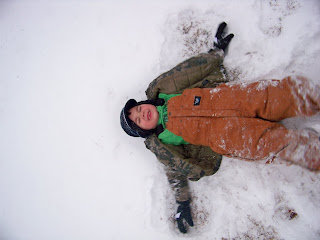 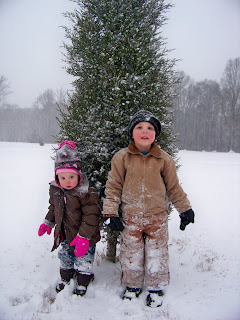 Ava and Austen posing with one of the many cedar trees we have in our yard. They look beautiful in the snow!
The next day Daddy had to work and the boys were dying to make a snowman. "We can't let the snow melt!" Dad was working overtime and spending the night at work, so it was all up to Mom. Just a disclaimer- (I had never built a snowman before, 1) because this much snow is rare, 2) because I have never really enjoyed playing in the snow.  But I'll do anything for my kiddos.) Aiden came up with the idea for using grapes for the eyes and of course a baby carrot for the nose. 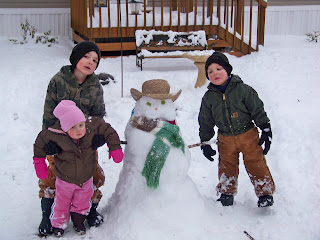 Our finished product, or should I say my finished product.
The kids were frozen by this point, no time for smiles!
About 3 minutes into building the snowman the kids forgot about poor Mom, who was 8 months pregnant and doing good to breathe in Daddy's coveralls! The boys were off exploring and poor Ava was trying to keep up. Every few minutes I would hear an "uh-oh" followed by that sweet voice saying, "Mom-ma".  Her legs weren't quite long enough to walk in the snow and I would turn around to find her lying flat on her back, stranded in the snow. She never cried, and would wait very patiently for Momma to come to her rescue.  Once the snowman was finished the boys were content with the results. Except for the comments such as "I bet Dad could have built a bigger one!"-Aiden and "Can I karate chop it now?"-Austen.
Posted by Jess at 11:23 AM