At the end of March, we celebrated Poppa Kenneth's birthday. Last year, I wanted us to go to Dorey's for his birthday. But with Poppa's rotating work schedule, upcoming turkey season, and the restaurant only being open three days a week, it never happened. But this year he's retired so he didn't have an excuse! We had planned to go out on a Thursday night, and then Daddy had to switch to 2nd shift. I knew Poppa and Papa would be heading to the lake soon, so we had to celebrate without Daddy. 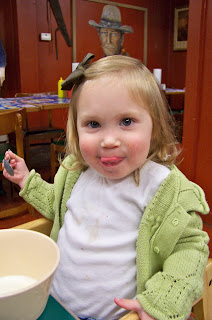 Ava enjoying her ice cream!
She absolutely loves sweets! Chocolate is her favorite, but we really have to limit her. If she eats too much she will never sleep! 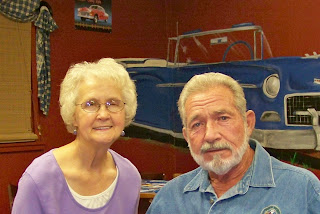 Nanny and Papa
Nanny Lee and Papa Bill got to go with us to celebrate their oldest son's birthday. The men in my family are not big on going out to eat. In fact, I have been out to eat with my Dad more in the past few years, than my entire life (still only a handful of times). The last time we went out to eat with Nanny and Papa was for their 50th anniversary. This year they celebrated their 52nd anniversary! We love them so much. The kids are lucky to have three great-grandparents. My Nanny and Papa, and Jake's Papaw are very special to us. 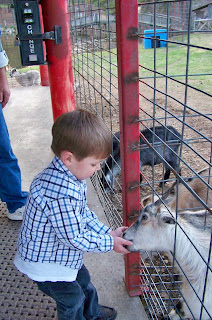 Austen feeding the goats.
After dinner the kids had to play with the goats. The adults go to Dorey's for the food, the kids go for the animals! They have goats, donkeys, miniature horses, rabbits, and deer. 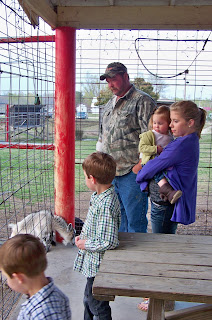 Austen, Aiden, Poppa, Ava and Bailee.
(This is the only picture I got of Poppa. He looked at me like he was going to break my camera if I tried again, I know my limits, so I quit!)
The kids were highly disappointed because Poppa Kenneth would not let them in to play with the animals. It is setup as a petting zoo for the kids to enjoy but my Dad is a worrier. He told the boys they absolutely could NOT go in the fence. "If you lose a finger in the gate, it is a looooong way back to the hospital." I have heard ridiculous statements like that my whole life, I just never realized how silly they were. I think he has gotten worse with age! I know when to keep my mouth shut, so I didn't argue. However, Aiden hasn't quite figured this out. Sometimes I wish he wasn't able to read (especially in places like the checkout line). Well, Aiden read the rules (explaining how to go inside the fenced area) and asked me, "doesn't that mean you can go in?" I told him yes, you can but Poppa doesn't know that and doesn't want you to. He whispered to me, "obviously Poppa doesn't know how to read!" 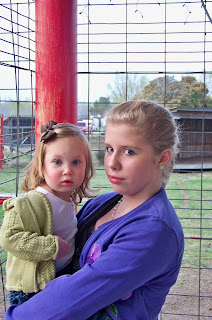 Ava and Bailee
Bailee got to go with us also. Since her Mom passed away and Bryan is away at camp, she has been hanging out with us more and we are really enjoying it. Ava is her new buddy. She especially likes the fact that Bailee carries her everywhere and pretty much lets her get by with whatever she wants. 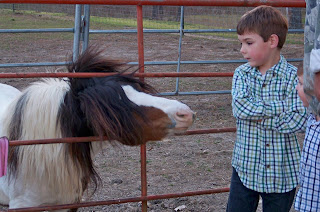 Aiden and one of the horses.
Aiden is a little leery of this guy. He bit his shirt a long time ago, but he has not forgot about it! Aus told us the horse needed a haircut, I have to agree. 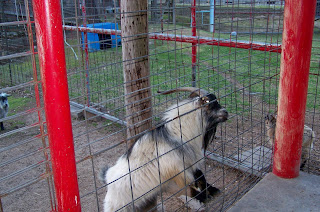 The MEAN Goat
They have had this billy for awhile and he is MEAN! When you are trying to feed the other goats, he will ram them or the fence to get the food. The first time we took Aiden to Dorey's, he was around Ava's age. This goat rammed the fence to get our attention and scared Aiden to death! For months all he talked about was how "that mean goat, scare me"!

We all came home telling Daddy about how much fun we had, so we had to go back again. So this week we went back with Daddy and we also invited Mimi and Poppa. We arrived much later and by the time I was able to take pictures the quality wasn't very good because it was dark. There was a baby gray goat that was so adorable! He would run and kick up his heels. I tried to get pictures of him but he was too quick. The boys have been begging for goats for over a year, and after seeing how cute they can be, they almost have me convinced! We just have to work on Daddy. ;-)
Posted by Jess at 8:58 PM